An Al Goodwyn Cartoon: The cost of serving in the line of duty

America has been handed a steaming pile of verbiage from liberal and mainstream apologists from Trayvon Martin to Michael Brown to George Floyd. It is time that the nation understands just what the truth is regarding police protection in many urban areas. It is not based upon some fictional view that thugs and robbers are only largely misunderstood “gentle giants” who only need a hug to make it all better.

These protesters and urban supporters should get a reality check and maybe be treated to tough love. So the next time you need help call a crackhead instead.

Liberals would scream bloody murder if a crackhead showed up at their door when they needed a cop.

But that is the nonsense that race-baiting creates. On August 9 in Ferguson, Mo., when police officer Darren Wilson was confronted with a charging young man who had attempted to take his gun, the race-baiting hate assault began in full force. With the trial of Derek Chauvin, which should be declared a mistrial being the latest race-baiting travesty, courtesy of Maxine Waters and Joe Biden. (Brandon Mitchel, the biased Chauvin juror exposed as a BLM activist)

It is nonsensical to claim that a person who just robbed a store, bullied the manager/owner and tried to take a police officer’s gun away is gentle and nonviolent, as claimed in Brown’s death. Or that a man whose toxology reports shows 3Xs the levels of fentanyl and other drugs died due to the actions of a police officer.

According to the FBI’s Uniform Crime Reports, there were 1.2 million violent crimes committed in 2011. That’s a lot of violence, and most of it was committed by the street robbers, lawbreakers, and stick-up artists who unfortunately populate many urban areas of American cities — not by the police.

There are 900,000 sworn law enforcement officers now serving in the United States; one of them is killed in the line of duty every two days. Every day, police have to make professional decisions about the gentle giants who are breaking the law.

I Can’t Breathe – but you could break the law?

The truth is that the protesters in Seattle, Minneapolis and other cities where “Hands Up” protests are now “I Can’t Breathe” have been launched should remember is that lawbreakers are not saints and should not be held up as such.

What would you do if a six-foot-four, 250-pound man came up to your door, smacked you around, taking your property and walking off while you stood defenseless? Would you say to the robber, “It’s alright, take it, and watch out for the police. They’re brutal.”

Of course not. You’d call the cops. And the odds that they’d hurt the robber are tiny.

What about the police, who answer tens of thousands of distress calls all over the nation who simply want to protect civilians and arrest the bad guys? Once every 58 hours, one is shot to death. Every year, 58,000 are assaulted, and over 15,000 are injured. (2014)

According to the National Law Enforcement Officers Memorial Fund, there were 96 law enforcement officers killed in 2020. One hundred families lost a father, mother, sister, brother or loved one. How many people marched to protest their deaths?

In the final analysis, perhaps these anti-cop protesters, including Maxine Waters and Joe Biden, who want the police out of drug-addled, violence-prone neighborhoods should get what they wish for. So you hate cops? The next time you need help, call a crackhead!

(Updated and reprinted from 2014)https://www.youtube.com/embed/hHZjoqL035s?feature=oembed 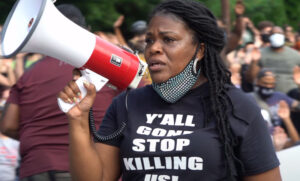